You are here: Home / Rural Women's Stories / “Yes, you are pregnant!”
Written By: Julie From: MN 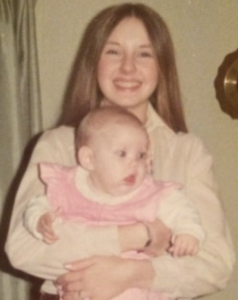 I was a simple little country girl. My parents were conservative Baptists, and never even drank alcohol. We had a dairy farm and lived thirteen miles out of town, so I didn’t get to be with my friends very often.

Even though I was an afterthought, I was daddy’s favorite. He called me Sugar Plum Sunday. I had two older sisters and two older brothers. I was born on my oldest sister’s seventeenth birthday. It was a huge embarrassment for her because that meant our parents still had sex.

I started kindergarten at the age of four, and I went to a little country school with my siblings. A year later we rode the bus to school in town. I was a good student and very involved with band and music. I liked school.

In October of my Sophomore year, I met Mark. His best friend was dating my best friend. The four of us went for a drive, and Mark and I had a great time. We started dating.

In September, when Mark and I were both seniors, my period was late. I didn’t want to go to the local doctor because they knew who I was, but I heard there was a woman doctor about thirty miles away. Five of my friends and I cut school and took a road trip to see the doctor. We laughed and had a good time. I never had a doctor exam, and she was very harsh; she finished and said, “Yes, you are pregnant!” I was numb. The ride home wasn’t as lighthearted and jovial.

How was I going to tell my parents? I knew they would be extremely upset; I was only sixteen, and they were not thrilled with Mark because he was a Catholic. My friend, Bev, offered to go to the farm with me to tell my parents. She dropped me off at the house as she went to park the car. I went into the house to tell my mom, and Bev saw my dad in the barn and told him herself. That was a stupid thing to do. When we were all together in the house, Mom said, “We just can’t-do this. What will people say? Maybe you should have an abortion.” My oldest sister lived in town with a couple of kids, and we called her because she knew of someone. My dad said, “First, maybe you should talk to Pastor Al.” He was a kindly, conservative, simple man of God. (There were only four families in our country church, and I played the piano) First, I had to tell Mark I was pregnant. He lived in a town ten miles away, and of course, we had no cell phones. I don’t remember what he said.

When we met with Pastor Al, he didn’t lecture us or judge us. He was just wonderful. When we left, we both decided we could not do an abortion. We were just going to have to do this. We had a polar opposite experience when we talked to Mark’s priest. He chastised us, especially me, because he said I led Mark astray.

My school friends treated me, okay, but when I traveled with my band, people would stare at me and whisper. It was hard. Mark went to a different school, so I don’t think it was as hard for him. He said, “Everybody knew I got you pregnant. It wasn’t easy on me either.” My response: ”Yes, but you didn’t have to walk down the halls with this huge belly.”

My pregnancy was very hard on my parents. My mom spewed venom, and that was not who she was, but my dad wouldn’t speak to me at all. He couldn’t even look at me. It broke my heart. I studied and got high grades and hoped it would help them love me again. One day while studying in the living room, I heard my dad come into the house and could feel him looking at me from the kitchen. Since he never spoke a word to me, I didn’t look at him; I just kept studying. Then I heard, “Julie, come here.” Stunned, I cautiously stood and walked towards him. He took me in his arms and held me close. Then, it was okay.

The principal and counselor at my school were wonderful. My due date was the same as graduation, and I was afraid my water would break as I walked across the stage. They allowed me to finish my last two weeks from home. I graduated with honors but didn’t get to graduate with my class. My mom made sure I had a cap and gown, and she took a picture of me in our yard.

I was very petite, ninety-pound girl to start with, and gained forty-five pounds. Amy was an eight-pound baby born on June 1st. My episiotomy was the size of the Mississippi River. I was terrified of Mark’s parents, and don’t remember meeting them. While I was in the hospital, his mom and sister walked into my room, and said, “Hi.” It was awkward. My dad didn’t come to the hospital, but late one night at the farm, when the baby was crying, and I was so exhausted, I watched the silhouette of my dad. He gently lifted Amy out of her crib, rocked her in his arms, and quietly sang,  “Would you like to swing on a star, carry moonbeams home in a jar…” It so touched my heart. My parents loved her very much.

While all my friends were going to college, I was home with my parents and a new baby. Amy and I started growing up together, and we lived with my parents for five and one-half months.

Mark and I married on November 15, 1975. We hired a babysitter for our wedding. I was young, naive, and starry-eyed. We first lived in a little basement apartment and had one vehicle. We moved from the basement to a 10×50 trailer. We thought it was the cat’s meow. It had pink everything; refrigerator, sink, tub, stove, walls, and curtains. I loved it. When Amy was about a year old, my period was two days late, and I was terrified I was pregnant again. But, as I was getting ready to go to my waitress job, I got my period. Thank God.

When Amy was five, we thought of moving to the city, but with both of us growing up in the country, we couldn’t imagine our daughter going to a big school. We still live in the town where we grew up.

At twenty-four, when Amy was in the second grade, Mark and I talked about the thought of having another child, and I was pregnant right away. Little Cindy was born. She weighed eight pound and ten ounces. The doctor told me I could not have another baby naturally.

In my circle of high school friends, five of them never had children, and two of them had abortions. I wondered if seeing what I went through influenced their decisions.

All in all, it’s been a great journey, and my four grandkids are the light of my life.

I am still married to Mark, but it’s not a fairy-tail ending. I like him, I respect him, and at many levels I love him. We did what we had to do to raise our family, to get out of horrific financial situations, and we like each other’s families. It is complicated: It isn’t just about him and me, it is about all these other people who have come to the table.