You are here: Home / Rural Women's Stories / I wouldn’t change a thing
Written By: Helen From: CO 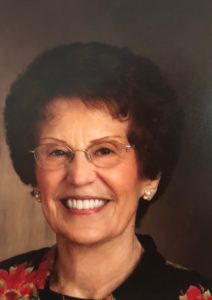 I was born in 1925 out south of town at my Uncle Steve’s house. The government tried to move men from the east to come out west and farm. They helped him get land and build a house. After his wife died, Steve convince my dad to come from Grinnell, Iowa, to live in the house. Dad had to agree to let Steve live with us until he died. So, we lived out there, and Steve lived with us. I went to the one-room grade school until I started fifth grade in town.

We had to move to town because of the dustbowl days and depression. Nothing would grow, and we couldn’t eat. Cows were dying. There was no grass. Daddy went to work for the WPA. (Works Progress Administration) He didn’t get money at his job, but this little ticket would come in the mail, and he would take it to the courthouse where they would give him money for groceries. We never had money. The only money we had was from mom cleaning houses for people when Akron was a big town. I don’t remember knowing anything about a candy bar.

There were seven kids in my family. A boy at each end and five girls in the middle. My oldest sister ran off and got married. My next two sisters graduated high school. I was third from the youngest, and as I finished grade school, mother took sick. I went to my Freshman year in high school, but then I quit because I had to take care of Mom and my little sister and brother. I was a poor student. I was more content in working hard for mom than doing my studies. I had to ask questions continually. As a Freshman, I had to take Algebra, of all things. I thought if high school was like that, I didn’t feel bad for not finishing.

When I was eighteen, Mom was very unhappy with me when I met Roy. In six months time, I wanted to get married, and I did. I had Dad’s blessing but not Mother’s.

We got married at the house. The Four-Square church didn’t have a preacher, so Mr. Johnson from the Assembly of God came and married us. Mother was not happy. Roy and I rented a cabin around Sterling.  After a couple of weeks, we went to visit my family. Teasing, my brother Richard said, “After two weeks, you are probably pregnant.” I said,  “I’m not going to get pregnant married to a trucker.”

Even on my wedding night he dropped me off at the motel and left for Lincoln. I suppose it was twenty years before I ever told my mother. I know she would have hated Roy if I had told her what he did.

How I met Roy was, he came through Akron. Four or five guys were in town at Odell’s Cafe. My friends called and said, “Helen, come down to O’Dells. This trucker guy is here, and he is going to take us out to the buttes.” I had to coax my mom and dad. They didn’t believe in that kind of thing. I cried, “I never get to go anywhere!” They gave in and let me go, with a curfew of course. I went half running down to the cafe, and off we went out to the buttes. When he parked the truck, everyone else took off, and I got out of the truck and stood there. Roy said, “Let’s walk up to the top there.” Before we went back to Akron, he said, “Would you like to sit in the front with me?” I said, “Oh, no. My friends sat in front on the way out and I don’t want to hurt their feelings.” He said, “We don’t care what they think.” So, I rode in the front.

I thought I would never see him again, but six months later, a truck parked in front of my house. Mom and Dad were home, and I introduced him as, “This is the guy who took us out to the buttes.”  Roy, looking at the piano, said, “Who plays the piano?” I answered, “My Momma does. I only play cords.” He said, “I have a mandolin out in the truck. If I brought it in do you think you could cord while I play the mandolin?” I said, “I don’t know if I can, I never have.” We had a lifetime of music in the house. Dad liked Roy’s music, but Mom didn’t approve of Roy being a trucker.

One night when he came through town, we went to Ft. Morgan to the movies. Driving through Brush, there were little beer places along the street. He pulled into one of those. I followed him inside. The waitress asked what we wanted to drink. Roy said, “I’ll have a beer, what would you like? With a bit of a grouchy voice, I said, “I’ll have a glass of water, thank you.” Roy said, “You don’t want something else to drink?” I said, “No, I don’t drink.” One night he told some friends the story of stopping at the beer joint. He said, “I knew right then I was going to marry her. That’s the kind of woman I want!” Hearing what he said pleased me so much.

Life has been good. If I had it to do over, I wouldn’t change a thing. You learn as you go along. I’ve had a home to live in, and finances from the government. (Medicare) It is just enough money to make me happy but not enough to make me greedy. I’ve had the same Mary Kay car (a car my daughter Bonnie was ready to sell) since Roy closed his eyes in January 2001.

Sweet Helen died on Oct. 10, 2019. Following is her obituary:  https://www.bowinfuneralhome.com/obituary/helen-fox

With profound sadness, we announce the passing of Helen Irene Fox, our loving and devoted mother, grandmother, aunt, and friend, on October 10, 2019, at the Akron Nursing Home while attended by her daughter Bonnie and niece Linda.  She was in her 95th year.

Born to Alvis and Ada (Martz) Elliott 14 miles south of Akron, Colorado on August 1, 1925, Helen was the 5th of 7 children in the family.  Four sisters and two brothers provided her with interesting learning experiences, tales of sibling antics and harrowing childhood capers, affection, and constant companionship.

Having grown up in the 20’s and 30’s in Washington County, Colorado, she witnessed incredible changes to her world due to the Dust Bowl and the Great Depression that drove the family from the country farm into town after the loss of their crops and livestock.  Life was difficult, but following her parents’ example, she learned to work hard, to trust the Lord, and to empathize with others who experienced challenges and loss.  Her compassionate heart was as big as the sky.

She attended school at a one-room country school south of Akron. She and her four older siblings walked several miles to school unless her brother Richard was allowed to hitch up the horse and wagon for the trek.  She started 5th grade in Akron after the family moved into town.

One spring day she met Roy Dale Fox when he transported a group out to the buttes in the back of his truck.  Weeks later while visiting her home, he was happy to discover she could play the piano and accompany him as he played the melody on his mandolin.  They married on September 5, 1943, and for the next 58 years, they continued to create beautiful music and happy, successful lives together.

Helen was predeceased by her parents, her devoted husband Roy in 2001, her dear son Roger in 2005, brothers Richard and Robert, sisters Eldora, Lorena, Gladys, and Norma, and one granddaughter Cammie.  What an awesome reunion it must have been the day of her Homecoming!

She is survived by her daughter Bonnie (Doug) Scroggs of Princeton, IL, her daughter-in-law Sherilyn Fox of Amarillo, TX, her many grandchildren, her sisters-in-law Velma Darby and Zadine Elliott, nieces, and nephews.

She lived a full life as an energetic, devoted, and wonderful mother, homemaker, and dedicated worker in the Foursquare Church. She treasured her children and embraced every moment with them.  She loved her role as Grandma and could hold her grandchildren’s attention for hours with her stories, songs, and activity.  Her passion for children was also evident as she taught little ones in Sunday school for many years and lovingly assisted families in need of her tender touch.

She was the keeper of family histories as she narrated accounts of long-gone relatives, family events, trucking and travel experiences, and amusing stories “from the mouths of babes”.  She was known for spontaneous, funny, and surprising stunts, a couple of which did not end so well.

Helen was a great cook, with homemade pancakes & syrup favorites of the grandchildren; she loved to bake and decorate cakes (her wedding cakes were masterpieces).  Being a talented seamstress she could take pride in the beautiful clothes she made for herself and for Bonnie.  She enjoyed working on and keeping an orderly, beautiful home that she and Roy built themselves, visiting over coffee with friends and relatives, working in the yard, and singing duets with Norma to the accompaniment of Roy’s mandolin and Connie Dannar’s guitar, with herself at the piano.  One of her most gratifying accomplishments was learning to drive Roy’s 18 wheeler in order to help him out on long hauls.  Family reunions in the mountains were highlights and pure joy for her as the family gathered from around the country.  She had a vivacious personality and was an “agent of happiness”, making friends everywhere she went.

Most of all she loved her family and instilled in her children a love for the Lord and strong values that have served them well.  Her legacy lives on through her grandchildren and great-grandchildren.  She was an encourager who believed each of us should reach high and never give up on a dream.  She will be dearly missed and forever in our hearts.

The family wishes to extend special gratitude to Helen’s niece Linda Dannar for her exceptional care and support. Thank you, family and friends, for all your visits and love notes.  Thank you, Rick, for generously helping to maintain her home when she was unable.

Delightful memories from a ninety-three year old lifelong spunky woman. She is the mother of a dear high school friend and holds a special place in my heart.