You are here: Home / Rural Women's Stories / It’s a wonder we didn’t kill ourselves
Written By: Barb From: CO 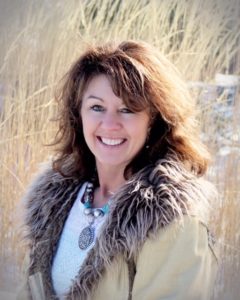 When I was little, my parents moved from Tribune, KS, where I was born, to Alamosa, CO, and then to Texas. In Alamosa, my dad went to school, and my parents had two more children.

My mom’s brother was a cattle buyer, and he knew of a feed-truck driver job in Burlington, CO, so we loaded up and moved to a farm 15 miles south of Burlington, in the middle of nowhere.

It was a blast. We had Shetland ponies and built forts in trees. We moved closer to the feedlot and rode a school bus, which was fun. I also had 4-H steers, and my brother and sister showed pigs. We took care of 15 million kittens. My dad was a very patient man because he didn’t like animals.

I wish every kid could grow up in the country.We would leave the house in the morning and come back at night. I don’t think our mother ever checked on us. We rode dirt bikes and would shoot B-B guns at the dry creek bed. It’s a wonder we didn’t kill ourselves.

A cousin from Kansas would come out in the summer, and we would see our grandparents in Towner. We would jump off the top of the house into snow drifts.

We survived hard times but had so much fun.

We would go snow skiing in the winter and water skiing at Bonnie  Dam in the summer. We loved to go tubing at Winter Park.

We would walk between our home and the feedlot where we lived until the beginning of my senior year in high school.

We had a good childhood.

I started my senior year with my parents getting a divorcing and the feedlot going down. It was a very hard year.

I went to college at UNC and studied Business Administration and Accounting. It was a good thing I left home because everyone had to grow-up.

I didn’t think college was great. I liked it okay, but was plenty glad when I finished in 1988. I’d rather be working.

I did some traveling for twelve years in Denver. I was an onsite and regional property manager and traveled every week.

After I was married, we moved back to Burlington because it was a good place to raise kids. Denver is fun until you have kids, and then the country is better. We had a good business, and I was allowed to stay home. We had three children. After a couple of years, we bought 35 acres north of Bethune, where we lived for ten years.

I can’t tell you how many hours I spent driving kids around and sitting in front of schools waiting for them.

I have no regrets.

I know growing up on the farm gave us a lot more freedom. I loved it out there.

Barb’s story speaks to the value of not only growing up on a farm, but moving from a city so her kids could too experience the freedom and joys of country life.

All the women I’ve interviewed seem to revisit their childhood emotions when they tell their stories. Their voices get small, and they seem to relax and gaze into the distance as if they are back in time. I am honored to capture their initial story. I hope it plants the seed for them to continue writing the hundreds of stories they hold sacred in their memories.