You are here: Home / Rural Women's Stories / We followed the rules
Written By: Dorcas From: NE 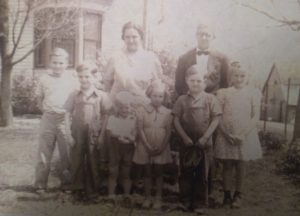 Have you noticed in an elementary classroom the windows are always to the left of the students? That’s because most children are right-handed and having the daylight coming from the left creates fewer shadows for the children as they write at their desks…except for left-handed children.  This was true in almost every single classroom wherein I was a student or where I was the teacher, starting when I was a child in the 1940s and continuing as a teacher into the ’70s. The desks on the east side of the building faced south and those on the west side faced north.

Students who attended Akron Grade School in the late ’40s or early ’50s may remember how a student was responsible at the end of each day to set the window shades to match all the others in the building. The upper shade was managed by a pulley which pulled the upper shade to the top of the window. The lower shade was pulled up or down manually and needed to be pulled down to the mid-section of the bottom half of the window. All the windows were supposed to look uniform from the outside of the building. Did anyone ever notice? Maybe, maybe not but our teacher would have insisted that they all look the same.

The architect for Akron Grade School had a good idea when he designed the building. Each room had a cloakroom, each having a door to enter and another to leave. We hung our coats there, and perhaps a pair of high-top tennies hung by its shoelaces just under the coat. There was a shelf where a lunch-box could sit, and on rainy or snowy days, boots were placed on the floor below the hook, Two doors made it easy when, row by row, we were dismissed to walk in one door, grab our coats and caps and walk out the other door. Nobody ever collided with a classmate. Students learned this in first grade and never forgot it.

Was it the regimented appearance of the room that kept us in order? Not totally but it helped.  If you had it wrong, it gave the teacher a chance to glare at you or raise her eyebrows without making you feel bad. It was a little something to let you know that you could do better.   A child learns to read signals and the last thing you want to see is a frown on your teacher’s face, but it’s better than getting chewed out big time.  Akron Grade School had few serious disciplinary problems during those years. We were taught responsibility; we followed the rules and our parents supported the discipline handed out when it was necessary. If we weren’t paying attention, the teacher would be subtle in reminding us of just that.  You didn’t want to see Mrs. Foree tilt her head forward and look over the top of her glasses at you. She didn’t have to say one word!

(The top family picture: Dorcas is next to the youngest)

I serendipitously met Dorcas at our grandson’s wedding in Omaha, Nebraska. She is the grandma of the bride, and she went to school in Akron, CO with my sister, Marva. She and her family also lived in Sterling, CO. It really is a small world. She is delightful, talented, and a great historian. Her father was pastor of the Luthern Church in Akron, and her family moved when she was a Sophomore in high school. She wrote and sent this sweet story after the wedding, and I hope she decides to write and submit many more.