You are here: Home / Rural Women's Stories / Survival by Gratitude
Written By: Lucy From: AZ 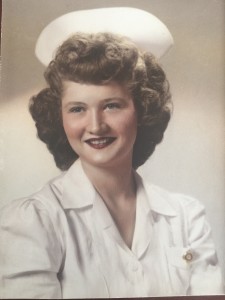 I concede, my early life was a little different. My father was a disabled WW I Veteran, and I seldom saw him. I didn’t know him at all. He died when I was eight. After high school, my mother took a train, all by herself, to New York City where she studied to be a legal secretary.

When I was sixteen, my mother sat me down and said, “I need to tell you how you became my daughter. You were adopted. Your father, while he was a sheriff in Shelby, Montana, brought you home to me because he found you not being cared for.” Hearing what she said, I felt overwhelmed. She asked if I wanted to look for my natural mother and I said, “I think you’re my mother.”

I appreciated her not telling me earlier. It would have been a stigma. She sacrificed so much. I was fortunate, and I felt loved.

I never had information about my natural parents, in fact, there was no record of my birth at that time. My mother remarried when I was ten. When I was in high school, my step-father had a birth Registered Certificate made. It was kind of him.

I always knew there was something different. I even had an aunt who didn’t like me, and I never knew why. My mother’s family was strong Christian, homesteader farmers, and illegitimate children were probably not acceptable.

When I was fifteen, my step-father was drafted into WWII and had to resign as the county attorney. The family had no money, and Mother went back to work. He was stationed in Washington State, and I wanted my mother to go with him. I found a vice-principal who taught me after school, and I graduated as Valedictorian at sixteen, so she didn’t need to stay in Helena because of me.

Because of my grades, I received free tuition to Montana State University in Bozeman, but I had no money for a dorm or books.  I heard of the Cadet Nurse Corps, a training program set up to staff hospitals. They provided my nursing education, board and room, and a small stipend. In 1944, I was sixteen, and I talked someone into taking me to Pullman, Washington. I had no trouble with college. It was exciting. I never had a boyfriend. I was too busy. Transferred to St. Luke Hospital in Spokane, WA, I had two years of practical work. I have a BA in science. For the R.N. course, we had three days of testing on every subject we studied. I was glad I passed, because if not, I would have had to take another year of training.

I met my husband Bob in 1946 at a reunion honoring service men. He was six foot four and good looking. He wanted to get an education and that impressed me. He was a solemn man, handsome, kind, and considerate. I thought he would be a good provider and the type of person I would like for a companion. We were different; he was very quiet, and I wasn’t. We were married September 3, 1947, when I was nineteen, and he was twenty-five.

Finding a good used car in those days was as rare as hen’s teeth, but Bob bought one so we could go Helena for Christmas with my parents. On the way home we had a wreck outside Missoula. We had no money to fix the car, or to get back to WA, so we stayed in Missoula. Bob finished school at the University of Montana. He chose Accounting as his major because he lost fewer credits in his transfer from a junior college in Farragut, ID.

While in Missoula, I worked at St. Pat’s Hospital on the Medical Surgical floor. There were twenty beds, two nurses, and a supervising nun who did nothing but supervise. In those days, they brought patients from surgery directly to the floor. I never worked so hard. I was paid $175.00/month for six days a week, twelve hours a day.

The best thing I did with my life was I had two daughters. I did something for humanity.

I danced for twenty-five years with the Sun City West Rhythm Tappers, and also danced in the movie, Mystery Men. We joined Briarwood Country Club in 1980, and I had breast cancer in 2003.

With money inherited from my father’s family, we took our girls and grandson on a Mexican Riviera Cruise for Bob’s 80th birthday.

On Thanksgiving day, the same year, Bob played eighteen holes of golf and drove the two of us to Las Vegas. In the hotel room, he said, “I have a terrible pain in my chest,” and he died. Being a nurse, I had guilt I didn’t keep him alive. HIs ashes are at Federation War Memorial in Phoenix.

You don’t know how strong you are until you have to be.