You are here: Home / Rural Women's Stories / Musings of Grandma Goble
Written By: Jennifer From: CO 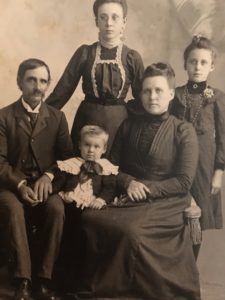 I remember many things about Grandma Goble. First of all, I thought she was mean, and I watched my behavior around her. She would speak gruff and scare me. She was kind too because she made all of her many grandkids popcorn balls for Christmas. She had Christmas dinners in a house packed with aunts, uncles, and cousins. The large living room with a table down the middle was always quiet, and it was left to me to make the room laugh, or so I thought. People gathering in silence still makes me uncomfortable.

Grandma had long salt and pepper hair. She would brush it with 100 stokes, every night, using a wire brush. I loved watching her. In the morning she would braid and wrap it in a circle on the back of her head and secure it with large bobby pins.

Grandma also had a beautiful Christmas Cactus in the east window of the NE bedroom. At Christmas, it was covered with beautiful red flowers. It was a sacred plant, and I knew not to touch it.

When she was older, Grandma rode a three-wheel bicycle. She never wore long pants, only dresses, pinning nuts (like nuts and bolts) to the hems,  preventing her skirts from flying up when she rode her bike. No other grandmas rode a bike around town, and I felt special to have one who did. When I tried riding it, I ran into the curbs. and wasn’t sure why.

When she was in the nursing home in Akron, a nurse told me how sad it was that she raised eleven children and hardly ever had a visitor. I know my dad barely went to see her. Maybe it was too hard for him, but I thought it was a lousy excuse.  I like to think others visited when that nurse wasn’t on duty. My stepmom, Mary, visited her every day. Mary was kind, especially to my Grandma.

During one of my visits to see her, she was standing in the hallway visiting, and someone said boys were easier to raise than girls. She straightened up and said, “Don’t tell  ME boys are easier!”

Grandma had a rough life. She raised eight boys and three girls, and the family was very poor. She said she took only one child to a doctor, and that was because of a broken bone. She read the Bible every night, often by the light of a kerosene lantern, and she saved money in a cookie jar for reading glasses so she could see the small print. The story goes that Grandpa would take her money if he needed something.

Because of a life with financial struggles, she never wasted a morsel of food. My dad brought her to the farm one evening for a family barbecue. We cooked steaks on the grill, and she cleaned the bone dry, including the fat. She must be the reason I think I have to clean my plate, and never take more than I can eat.

My grandparents were married for nearly 70 years. I have a quilt Grandma Goble made that I bought at their estate sale, reminding me of her talents and perfectionism. She was a strong woman, and an uncle told me, “We got whipped every day. We didn’t know if it was because we were bad or because we were good.”

I think it was because she was overwhelmed with having eleven children.  If they misbehaved, it was more than she could manage. Maybe it was crowd control.

What I know for sure: My life is better because of her, and I am grateful.

My Grandma Goble was born Myrtle Mae Hicks on February 20, 1890, in Burlington, KS. She married William Burton Goble on February 19, 1908, one day before she was eighteen.  She was the oldest of four children with one sister and two brothers. She died Dec. 7, 1981, at the age of 91.

My Grandma Goble, without a doubt, was a rural woman. I don’t think I have the fortitude to live her life. Poverty and large families was not uncommon in the early 1900’s. I admire her and her strong constitution. Thanks to my sister Marva for sending the pictures. The first photo is Grandma’s family. She is the oldest and standing in the back.