You are here: Home / Rural Women's Stories / Lord, if this is the night
Written By: Marilyn Eileen From: AZ 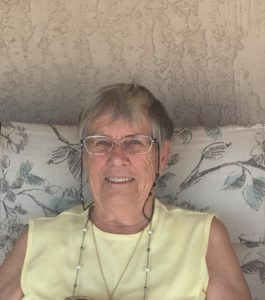 I was born and raised in the small town of Oakland, Nebraska. It was 1250 population and hasn’t grown since then. I had two brothers: One ten years older and one seven years older. I was the first one to be born in a hospital. I was a nuisance to my brothers. They were mean to me, and I didn’t like them at all until I was grown. They said I was spoiled, and I probably was. I didn’t have chores except for watering the African Violets. I can still hear my mom saying, “Don’t get water on the leaves!”

Back then, times were different. In grade school, I used to come home from school and Mom always had snacks. I would take my dog and my food and sit by the creek. I would just sit there with my dog. We might go sleighing at night or even ice skating. I never could ice skate. I spent more time laying on the ice than skating.

I was married very young. When I was sixteen, I served beer in a small restaurant. No state officials ever checked, but I think, at that time, it was still a no-no. Bill, who was a Marine stationed at Camp Pendleton in Oceanside, California, walked in the door, and that was it. The fall after I graduated I took a bus, all by myself and Bill met me in Oceanside. It was the first time I had been out of Nebraska. From there we took another bus to Yuma, Az (I was too young to get married in CA) where we were married in a wedding chapel. Yuma was known as the Wedding Capital. My parents were not thrilled, but they grew to love Bill.

We had four boys, three before I was twenty. The first two were twins. Twins run on both sides of the family. In fact, I have one cousin who has twelve children, six of whom are twins. All four boys were supposed to be girls. There hadn’t been a girl in Bill’s family for eighty-seven years. We lived in Fremont and then in Omaha for fifty years.

The saddest part of my life was one of the identical twins had juvenile diabetes. It was hard. At the age of thirty-two, one twin gave the other a perfect cross-match kidney. We are forever grateful for his gift. The one with diabetes also had to have a leg amputated. But, today he is in Canada fishing.

Our third son probably gave us the most trouble because he was the most creative. He inherited a sense of humor from his uncles. He was in high school wrestling, and it was fun going to all his events. He was also an Eagle Scout. Bill was the Scout leader for twenty-five years. I used to say they had one meeting five times a week.

It was interesting raising those boys. They are all different and all talented.

My mother and one brother died in separate car wrecks. Mother was seventy-six and died on Bill’s birthday. My dad said it was raining, and he passed a car pulling a boat. The boat swung out and hit their car, killing Mom instantly. My brother died when he was eighty. He was on his way to go fishing, one of his favorite hobbies, besides telling Ole and Hilda Swedish jokes. He crossed the highway in front of a huge truck.

The happiest part of life was when Dad and I were alone after the kids were gone. We traveled, went dancing, and played golf.  When we moved to Arizona ten years ago we bought a piece of metal artwork to hang out by the patio; it said, “The End Of The Trail.” It was an old Indian on his horse. Bill named our house after it; he said we started out in Arizona (married in Yuma) and this is where we will end. I lost Bill four years ago. We were married sixty-four years.

I have six grandkids and eleven great-grand. I also have several step-grand I consider as my own. They are all special, but because of a divorce, we spent a lot of time with our third son’s children. His daughter would come over, and we would cook. I even made her prom dresses. We were very close. Once, her boyfriend stopped by and asked if he could borrow her for a minute. She came back with an engagement ring. I felt privileged to be the first person to know.

My life is good. Family is close, and my third son comes over every morning and drinks coffee with me.  Every night I pray, “Lord, if this is the night, make it quick.”

Marilyn is the mother of our landscape designer. She has a quick mind and a wonderful sense of humor. We both laughed throughout her storytelling. We had a great time. Enjoy her delightful story.

I visited with her third son in July 2021, and he said the whole family celebrated her 90th birthday in Branson, and he still has coffee with her every morning. Lucky mother and son.