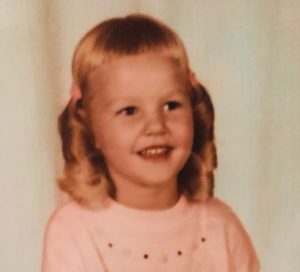 As the third of three girls, I was supposed to be a boy. My dad lost a six-pack of beer on me. I heard about that for a long time, actually most of my life.

I went to country school and had the same lady teacher for four years. We finally got a man teacher the last year the school was open. Our dad only took us to school on the first day. He would introduce himself and us three girls to the teacher. He would say, “If you have any problems with my daughters you have my permission to whip them. You let me know, and I’ll take care of the rest at home.”

We three girls rode a horse to school when the weather was really bad. I always got the tail-end. By the time we got home, I was almost hanging onto the tail. Other times, our mother took us to school by car or truck.

The country school closed after my fifth-grade year. When I was a sixth grader, I had to go to school in town, and as if changing schools wasn’t a big enough change, I was taller than any of the boys in my class. I felt like a big country amazon or dinosaur, whatever. We went from fifteen in the whole school to about thirty to thirty-five in a classroom.

I remember spending hours at home making mud pies. We created our entertainment. When we started school in town Mom went to work at the local drugstore. As we got older, dad would hire the boys in my class be our summer hay help. We girls had to do the cooking. Mom would tell us what to fix, and dad always expected some dessert. This one day we decided we’d whip up a cake. We decided to put a powder sugar frosting on it. There were red ants in the powdered sugar. Remember, we lived seven miles from town so we couldn’t just run into town if we didn’t have something. We knew the red ants would show in the frosting, so we covered the cake with red candy sprinkles. They came in and ate lunch.  They had their dessert, except us girls didn’t eat any. They all got up to leave, and dad stayed at the table. “What’s wrong? You girls didn’t eat any cake, what’s wrong?”  We told him what we’d done, and we got in more trouble from mom than dad. He just chuckled.

My dad had viral pneumonia when he was twenty-one and lost total hearing in both ears. By the time I came along, he was deaf. I never knew him any other way. So, I had a real language problem. He would get after me, and I would turn my back and cuss him out. When I was ten or eleven, he went to Kansas City to an ear specialist. They had come out with a new procedure where they could rebuild the Stirrup in the inner ear. So, he chose to have it done in one ear, Unbeknownst to me, the surgery was successful. I was setting the table with silverware one day, He was in the living room and said, “Quit slamming the silverware on the table.” I said, “I’m not slamming it on the table.” So, I laid down some more, and he said again, “Don’t slam the silverware on the table!” And, I with my back to him, I chewed him out. I said words I shouldn’t have said. The next thing, I feel a tap on my shoulder. I turn around, and he is standing there. He said, “I can hear you now!” I think I had soap for lunch. I think the reason I was so skinny when I was young is I ate so much soap.

My mom, who died this month at the age of ninety-five was a spunky woman. She had a limit as to what she would take off my dad.

She never let dad teach us to drive a tractor. I think she didn’t want us to sit out there day after day. I remember just once she drove the tractor. We girls must have been ages five to ten. My dad told her, “Go to the field and don’t come back until you run the wheels off of the #$%^&*  tractor.” My mom walked home and was very late. Dad asked her where the tractor was. She told him she left it out in the field. He asked, “Why?” and she said, “Because you told me to run the wheels off it, and I did.”

I remember her telling the story of when they were first married, and she made him a cherry pie. He came in, and she said, “Look what I made today.” He said, “Well, is it fit to eat?” And she said, “Well I guess you are not going to find out!” And she opened the back door and threw it to the creek, pie plate and all.

Another memory is Mom always asking dad for a nicer kitchen, but new machinery always showed up instead. He went to the sale barn one Saturday, and she went to the shed and got a crowbar. When he got home, the single water pipe to the sink was all that was left standing in the kitchen. He walked in and said, #$%^&*!” She got her new white metal sink and cabinets.