You are here: Home / Rural Women's Stories / Jesus wants us to be kind
Written By: Apryl From: UT 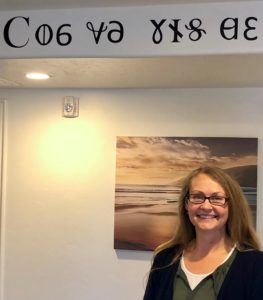 Her name is Apryl. She and her husband own and operate a Bed and Breakfast. When we checked in, she wrapped her arms around me saying, “Come here, I’m a big hugger!” Within minutes I knew she was kind, friendly, a hard worker, and Mormon.

We were the only guests, and breakfast was down a long narrow hallway and around the corner. Apryl and Tom were in the kitchen and had prepared a yummy spread. She asked if the coffee was okay, saying, “We haven’t got the coffee thing figured out yet.” Included with breakfast was an enjoyable all-inclusive conversation.

They opened Stone Hollow Event Center Bed and Breakfast in July of 2017. They did the entire renovation themselves, and their primary income source is hosting large groups; weddings, rehearsal dinners, and family celebrations.

When both were in their 40’s, with their two daughters grown, Apryl and Tom sold their two businesses and followed a personal calling to do an eighteen month mission for their Church of Latter Day Saints. They were not told where they would be stationed, they had to pay all their expenses, and unless there was an emergency, were not allowed to go home for the duration of their commitment. They had one day a week where they could leave the mission site to visit surrounding areas. The purpose of the mission was to eliminate life’s issues and only teach the work and word of Jesus.

They did have two emergencies: Their oldest daughter had a baby; they had a water leak in their home bathroom. They couldn’t stay the night on either approved home visits.

Mainly we heard about the Book of Mormon. She spoke of its historical account of Jesus, Jews,  and the migration of Mormons to America. She said it follows the teaching of the King James Bible, and we are all called to be kind to one another, want the best for every person, forgive others, and teach Jesus’ message. She said, “Imagine if everyone in the world woke up, treated everyone with kindness, and sent out only good wishes.”

She also spoke of the value of a mom and dad in the home, with dad being head of the house, and mom being the nurturer of children; equals.  Raised on a farm with four sisters and five brothers, and a dad who left them, Apryl believes in the value of a family with both a mom and a dad. She and Tom believed the root of the violence in our country is the breakdown of the family.

I learned so much, and Apryl was a true testament of faith.

As a child, I was a Presbyterian, became Catholic when I married, and after volunteering at Katrina said in jest, “I think I’ll be a Methodist.” (They provided extensive disaster assistance) Now, maybe I need to buy the Book of Mormon? The study of religion is fascinating.

Above Apryl’s photo, is the Deseret Alphabet, “Choose you this day.”