You are here: Home / Rural Women's Stories / It helps to have a village
Written By: Faith From: CO 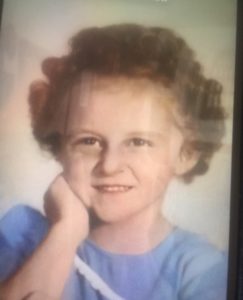 I was raised on a small farm/ranch one and one-half miles south of Kirk, CO. It is a very small town, and everybody was family. I joked I had to be careful not to marry my cousin. I had one older brother. Our farm had cattle and chickens. My brother helped dad with the milking, and my job was cleaning up the cream separator. We had chickens and mom would raise them for the family. When it came time to kill, clean, and dress the chickens, I had to help mom, and I hated that. It took six months to be able to eat chicken again.We always had horses, and we rode them to bring the cattle in at the end of the day. Dad would leave them pinned up overnight because we didn’t have to get them in the morning.

When I was nine or ten years old, I had a horse who went kind of crazy. It didn’t buck me off, but it ran through a three strand barbed wire fence and scared me to death. It cut him all up. I finally fell off, and I was probably half a mile from home.  The horse got back to the house before I did. When dad saw the horse without me, he came looking.

We had no girls sports when I was young, but there was an all-county track meet, and I could run fast. Short legs and all, I could run. I couldn’t high-jump or that other stuff, but I could run. We girls rebelled when I was in high school. A bunch of us snuck into the locker room and put on some of the old shoulder pads and uniforms and went marching out onto the football field when the boys were practicing. The school still didn’t let us play. All girls could do was be a cheerleader, and I was a cheerleader. That was the only outside school activity we had. We were rebelling when we dressed like football players.

In my community, girls were not expected to go to college. Very few ever did. It never entered my mind that I should or could.

I started dating Darrell (husband) at the end of my freshman year. I dated him during my sophomore year. He went to school in Flagler. We wanted to get married. My dad said I couldn’t get married until I graduated, and he even offered me a vacation to Hawaii if I wouldn’t get married. Since I didn’t know anything about Hawaii, I didn’t take the trip. I just wanted to be with Darrel. We had so much fun and I wanted to finish school so we could get married. Nothing else seemed too important. I took correspondence classes between my sophomore and junior year and graduated at the end of my junior year as Salutatorian of the senior class. Getting married wasn’t about having poor grades.

Darrel and Ovid Shirley picked out my wedding rings from a catalog at the Anton store where Darrel worked. We were married a month after I graduated. I turned seventeen in May and got married in June. I don’t think it’s going to last; we’ll be married 59 years this June.

I wouldn’t recommend it to anyone else, but it worked for me.

When I was still living at home, my parents would go on double dates with us to the movies. One time, Darrel parked and started making out. It got real quiet in the back seat. My parents were pretty easy going. They would go along with about anything, but they were shocked about that.

I remember one time we got home from the movie, and my parents didn’t go with us because they went to a dance. When we got home, we sat in the car and fell asleep. When my parents came home, my dad had too much to drink and didn’t want Darrel and me to see him, so they just kept driving around waiting for Darrel to leave. They thought he would never go home. They finally gave up and came to the house.

Our oldest was due to be born on our first year anniversary, but he was six days late. Married on the 7th of June in 1959, he was born on the 13th. So, I was pretty young. Our youngest was born in Oct of 1962. I had two by the time I was twenty. I would do it again. It worked out good because we were young enough to keep up with the grandkids. When I was young, my grandparents couldn’t do anything. I was a grandparent when I was in my 40’s.

After we were married, we moved to Brush; I went through a time when we weren’t close to family and Darrel was working all the time, and the kids were not in school. Those weren’t the happiest times. We couldn’t afford a babysitter, so I was just home with them fighting and raising cane. After both kids were in school and we still needed some money, I started working at J.C Penny’s at Christmas in the shoe department. It was an awful job, smelling everyone’s feet. Once, there was a guy who came in drunk and dirty. He kept trying to touch me where he shouldn’t, and he stunk. I wanted to leave because I didn’t like working in the shoe department. But, I couldn’t because we needed the money for Christmas.  Later I was moved into an office manager position. Payroll, inventory, cash payouts, and orders were all done by me because there was no-one else upstairs in the office. I learned a lot because I didn’t have any training. I learned on the job. In Brush, I did enjoy belonging to the wives of the firefighters. We had fun, and I could go because we all took our kids.

When we moved to the farm at Anton, Darrel and I had four horses. We did a trail ride once down the river east of Cope. There were probably thirty of us, and we took a three or four-day trail ride. My youngest was only about nine years old, and she didn’t enjoy it much.

I quit riding not long after that. Darrel got me a new horse, and I was riding her one day when a pheasant flew up and spooked her. She reared up, and I fell off but only got one foot out of the stirrups. She took off and drug me until I finally jiggled my foot free. I don’t think I rode after that.

I never broke a bone in my body until I was old enough to know better. I was playing softball in Anton, and Wanda was pitching. They told me to slide into home, and I didn’t know how to slide, so I broke my foot. I guess when you’re thirty-five, you’re not supposed to play softball. That was the end of my softball career. Al Willis was the coach.

I don’t like to dwell on negative things, but in our first year on the farm there was a blizzard, and we lost thirty baby calves. It was a nightmare. We didn’t have a four-wheel drive pickup, and we couldn’t get to them. We thought it ruined us, but we had moisture, and crop prices were good, so we survived.

We never took a vacation because we didn’t have the money. We would use our vacation money to paint the house or make repairs. One year we decided we were going to take a road trip for a whole week clear to the ocean in Texas to see Darrel’s sister. That was a disaster. There was one day we didn’t have the kids fighting over who had their finger on the other side of the back seat. They were always fighting over something. We didn’t have fun and neither did the kids. We never took another trip with the kids.

Growing up and raising kids in a small country community was easier than people have it today. Now they scatter all over, and it does help to have a village.