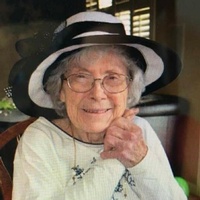 I was born in Ovid, Colorado on February 14, 1927 to Frank and Mayme Tate. I was the fifth child of seven kids.

My father worked at the Sugar Beet Factory in Ovid.

I remember playing with my sisters, brothers and cousins.  I started to school when I was 5 years old.   When I was in the first grade, I was doing summersaults on the iron bars at the school and fell and hit my head and cut it open on the cement walk. I got to go home and go to Julesburg with my mother, the first and only time I remember ever going to Julesburg.

We lived two houses away from my Grandma and Grandpa Brock.  Grandpa Brock had a field of potatoes across the street from where we lived.  He gave his grandchildren pennies to pick the potato bugs off the potatoes for him.  He also had honeybees and sold honey from them.  He had a honey extractor in his basement. His bees were always stinging all of us kids.   Grandpa Brock also hunted, trapped, and sold the animal hides.

I remember my Grandmother always had her white hair in a bun on the back of her head. My Grandfather had a mustache.  He always poured his coffee in a saucer to cool and drank it from the saucer.  He always ate his peas with a knife.  We went to Grandmas every Thanksgiving and had oyster stew.  I didn’t like it!!!!

My cousins lived by my grandpa.  I played with cousin Jim.  Grandma wouldn’t let us play inside, she would give us a slice of bread with honey and butter and send us outside to play.  Jim had a sister named Mayme.  Mayme and my sister Iola always played together.   They always got to play inside with their paper dolls.

When I was 10 years old my father got transferred to Brush. It was quite a trip up to Brush with seven kids, mom, dad and our dog “Tootsie”.   On the way, our dog Tootsie wet on us and dad chewed tobacco and spit tobacco juice out his front window and guess what, you guessed it, it would come in the back window!  We finally arrived in Brush and moved into a house in Munn’s addition. We all started to school except for Harry he was only four years old.  I was in the 6th grade and very shy.  I made a new friend Martha Fanning.  She thought I was stuck up, as I wouldn’t say much.  Our neighbor girl and her friend Helen Fender would throw rocks at us!  One time I got tired of her throwing rocks at us so I picked up a rock and threw one back. They told on me and the other girl’s mother came and told my Mom, so that stopped the rock throwing from then on.  That is how I became friends with Helen Fender Deffenbaugh.  We have been friends for 80 years.  She now lives in Reno, Nevada.  We went everywhere together, to shows and street dances on the 4th of July. We even dressed alike for the dances.  Mom even made us checkered skirts one 4th of July.  We used to sell pop bottles for extra money.

I met my husband Marvin one Saturday night after the show that Helen and I went to. Marvin and his brother John went to school in Ft. Morgan.  They asked us if we wanted a ride home.  We accepted and I started dating Marvin after that.  We would go to movies and the roller rink at times.  We even went bowling.

One summer Martha Fanning and I went to Denver to work.  We got a job in a restaurant.  We only stayed two weeks!  so I moved back home.

World War II started in 1939 and ended in 1945.  My brothers Frank and Fenton joined the Navy.

I married Marvin on Feb 20th 1943.  Marvin was drafted and he left for the war in April.  He went to Palacios, Texas for training.  Marvin was gone for almost 3 years. My sisters Iola, Francis and Ina were also married to military men.   While our husbands were away, we all moved in together.  Iola’s husband was wounded in the war so she went to Utah to see her husband.  She got sick with a strep infection and ended up dying at the age of 20 on July 4th, 1944.  My other two sisters had babies and I had Sharon on Oct 26, 1943.  Marvin came home Christmas of 1945.   The war was over. Marvin worked at a Hardware store.  In 1946 we moved to his Uncles farm and Marvin farmed for him.  Karen was then born on Thanksgiving Day Nov. 28th, 1946.   In 1947 Marvin became a carpenter and started working in town.  We lived in a little house on the prairie by Marvin’s parents and raised chickens and had cows.  We sold milk and eggs.  We had no electricity there or running water. We had to pump our water and use oil lamps and of course the “Outhouse”. We had to fight off the rattlesnakes, which would come and lay on the porch.  Sharon would run in the house to tell me there was a snake but she left Karen outside with the snake.  It was not fun that’s for sure.  We moved to town in 1950.  Tim was born on March 30, 1951, and Wini was born on March 27th, 1952.

Marvin built us a new house on Ray Street where we raised our children.  Every year the family gathered there for the 4th of July following the parade. We would have fun celebrating our independence with family and friends and watching the fireworks.

I also helped to raise the neighbor’s son Eddie Cooperrider as his parents passed away.  We all love him dearly and he is now a big part of our family.

Phyllis was a full time stay at home mother and homemaker who was an excellent cook and baker.  In her free time she was a homeroom mother and Cub Scout den mother, did arts and crafts like sewing and painting.  She also loved to read and do word puzzles.

As the years passed, She and Marvin enjoyed retirement and time with their grandkids.  They hosted many large family get-togethers over the years at their home on Ray Street in Brush, Colorado.  The tradition of everyone gathering on the 4th of July continued as the entire family would watch the parade together and then come together for a chicken dinner afterward.  Their home could barely contain all the family and friends that would come together for these celebrations.

After Marvin’s passing, Phyllis moved to Akron to live near her daughters.  After suffering a severe leg injury, Phyllis went to live at the Washington County Nursing Home.  While there, she met Lola Mae Spicknall and they became the very best of friends.  They developed such a deep inseparable friendship; it made both of their lives so much more happy and enjoyable.  They loved playing Bingo at the nursing home together.

(Phyllis’  family added to her story for the obituary at this point. In my perfect world, we would all write our stories. We all have great stories, and who can tell them better?)

A funeral service was held Friday, March 9, 2018 at 10:30 a.m. at the Foursquare Church of Akron.  Interment followed at the Akron Cemetery.  Memorial donations may be made to Bowin Funeral Home, so that a bench may be placed at the nursing home along the new parade route.

I didn’t have the privilege of meeting Phyllis. A friend was touched by her obituary because Phyllis wrote it herself. The family granted permission to share, and I hope it motivates us all to write our own story–A great way for US to be included in our obituary.