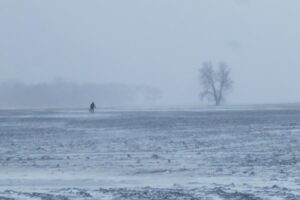 March 25, 1952: I was 13, my younger brother was 12. Our parents needed to pick up our siblings from their schools in Missouri and Nebraska for Easter vacation, expecting to be gone for three days. A blizzard was forecasted, so they left a day early, Tuesday morning. That evening, it was lightly snowing when Steve went down to do chores at the five-acres, a mini-farm just outside the city limits of Akron, Colorado, about 3/4 of a mile from our house. I stayed behind to cook a meal for us. Both of us were capable of those respective duties, but obviously, chores were the more difficult and less likable.

By the time he got back, the wind was whipping up the snow, and gratefully, the superintendent called off school for the next three days. Because two heads are better than one, I went with him. The temperature was cold, and my feet were freezing; I sat in the granary, took off my boots, shoes, and socks, and rubbed some life back into my feet. Steve did the work; I was just there to keep him safe!

By the 2nd evening, the cows were giving no milk; the water tank froze. The next morning, we filled a tall 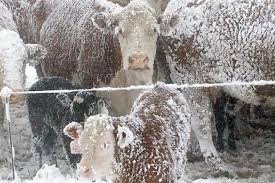 cream can with water, capped it with a lid, and transported it on our sled, taking turns pulling it and steadying it. We did this for the next seven trips.

Saturday morning, Mom called from Chester, Nebraska, saying they were snowbound. A farmer and his wife had provided refuge. She called again that evening, saying that they were still at Chester and we must call our church members to let them know there would be no services the following morning. Steve looked up the numbers, and I did the calling. After each call, we both broke down and cried.

On Sunday morning, the sun shone brightly on the snowdrifts. Again we went to do chores, this time walking over the fences now covered with crusted drifts. Steve took along an ax, chopped through the ice in the tank, and found cold-but-unfrozen water. The blizzard was history.

That evening, we were playing Canasta when the front door opened, and there was our brother Paul, followed by the rest of the family. We were overjoyed; all was right with the world once again.

Today, someone would have called the authorities and reported that two minor children had been left alone for five days. Our parents would have been in jail, and Steve and I put into foster care. We didn’t know it at the time, but kind people looked out for us. The Washington County Superintendent of Schools lived in the last house we’d pass before reaching the five acres. His wife and children watched for us each morning and evening, making a note of when we’d arrive and make sure we’d left the acreage within a reasonable period-of-time, and no doubt, there were others along the way that watched our comings and goings.

This is the third submission by Dorcas from Nebraska. She writes beautifully and is blessed with an amazing visual and detailed memory. I so enjoy her stories. Thank you again, Dorcas, for sharing.