You are here: Home / Rural Women's Stories / Going for a Little Walk
Written By: Diana From: CO 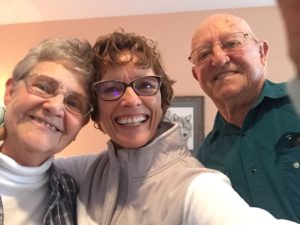 Harvest was over. There were things to do, but nothing as hectic as June and July had been.

Most days I had time to take a walk from the house to the Baseline Road (a half mile) then east on the Baseline another half mile and then back to the house. A leisurely two-mile walk. At least, most days it was leisurely.

One afternoon I set out walking and talking to the red-winged blackbird that flew from one perch to another on the phone line and sang to me as we went along. Suddenly I spied movement in the deep barrow ditch [research] on the other side of the road. I stopped. Slowly, a monstrous dark brown bull—there was no doubt that he was a bull—rose from the ditch, swung his head toward me, and stared. I guessed I had interrupted his nap.

“Oh, shit,” I thought. “Should I stand still or run back to the house?” Neither of those options seemed to fit the situation. The only possible shelter was the telephone pole about thirty feet away “Can I get there if he charges?” I wondered. “And how long would I be able to run round and round that pole before he got me?” My blackbird was still singing—easy for him, he wasn’t on the ground.

I took a slow step toward the pole. Then another. His head turned with my movement as I slowly walked toward the pole. Slow steps, listening for a snort, always keeping an eye on the bull but trying not to look him in the eye. No challenges from me. I got to the pole and peeked out from behind it. He had turned around but not moved from his spot in the ditch. So I kept walking from pole to pole and then east on the Baseline Road—my usual route, continuing to keep looking behind me.

When I came back the bull was gone.

He considered this. ”Both, I think.”

A few days later we were in the coffee shop in town and heard that the bull had died. I guess I scared him to death, but I didn’t tell anyone about it for a long, long time.

True farmwife stories are endless, tireless, and heartwarming. They range from humorous to tragic, but all include history we cannot afford to lose. This one is no exception. This delightful story was sent this morning and it is too sweet not to share.