You are here: Home / Rural Women's Stories / For God’s sake, EAT!
Written By: Sara From: CO 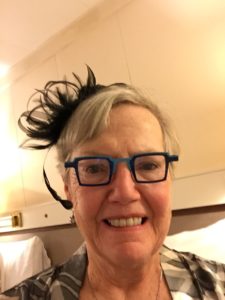 Ready to be 75, it is hard to recollect which story would be most interesting.

I would be almost four when Cindy was born, and I knew I needed to be loved by somebody. I needed differentiation from my younger sister. That has followed me most of my life.

My grandfather was a state senator, and my grandmother was entitled. She had a hired girl. She once told my sister, “Never admit you are wrong.” I never liked her much. One day, at their ranch, I wondered behind the house and got lost. I was scared and started screaming. It was my father who found me. It was the first time I knew I was loved unconditionally.

I grew up with the values of my mother and her mother; a woman’s appearance and clothes. Both of these women filled me with the notion I was fat, which I wasn’t. I was bigger boned than my mother, but I was certainly not fat.

The image had implanted itself, so I always thought I was fat, and trying to lose weight. As a senior in high school, I wore two girdles; one a panty girdle, and over that a rubber Playtex. Both were very hot in the summer.

Around the time I was fifteen, my mother pulled me into the hallway closet to point out in the mirror I was fatter than she. I grew up harboring an inferiority complex and feeling I always had to try harder to be acceptable in whatever I took on.

My first year of college I went to an all-girls school because that is what my mother had wanted. She died when I was 16. The school had a father-daughter banquet. I saw my father come down the stairs wearing a white dinner jacket. I knew he didn’t have a white dinner jacket; he had rented that along with trousers. He was wearing black shoes, and he had always said he would only wear brown shoes. Until that time, I don’t think I had ever felt that kind of special.

During dinner, I said, “Oh, look at Gayle Rogan, isn’t she beautiful?” My dad said,  “I ran into Mr. Rogan upstairs, and he said, “My, what an attractive daughter you have!” I know perfectly well now that he didn’t run into Mr. Rogan, but that was my father. He loved me totally and unconditionally.

When I was a few years older and planning a cruise trip, my dad, who saw how I tried to be thin, said, “For God’s sake, EAT!  Stay off your diet because the food will be wonderful.”

I lived seventeen years in New York City and was not cheated of life on any scale. I worked hard and played hard and missed nothing.

I subscribed zealously to Vogue and Harper’s Bazaar. I was a fashionista, always keeping up with current fashion, and always hoping my size would be smaller.

From the influence of an ordained woman I met at St. James on Madison Ave., and God’s call on me, I entered the seminary in Cambridge, Massachusetts; Episcopal Divinity School. I didn’t do it for ordination, but to examine the spiritual course of my life, and my relationship with God.  I resisted ordination at first, but in the words of scripture, Galatians 4:4, “In the fullness of time…”

I was ordained, and through the same women, I became involved with Charismatic Renewal. I found a relationship with God through Jesus Christ I had never had before. I became very much alive and very much who I am today.

Ordained life was also good for me because nobody could see under all the vestments.

Some years later, while working in Virginia, I had a vision. I was on the grounds of Fountains Abbey in Northern England, and I was naked with no cover in sight. Jesus came and threw a translucent or transparent cape-like thing over me. It seemed he was covering me because of my concerns, not his.

Jesus didn’t care if I was fat or not. He didn’t see me that way. It was another example of unconditional love.

I found myself and became a whole person through my dad’s love and God’s love through Jesus Christ.

So many women struggle with body image, and Sara’s story is an honest portrayal of her journey to healing and thriving. Enjoy and learn.