You are here: Home / Blog / Maxed out frustration 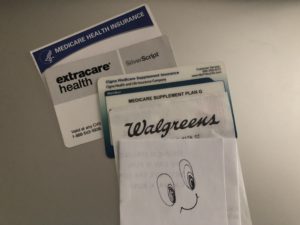 This morning I went to Walgreens to get a flu shot. Easy. I waited five minutes, and Mathew gave me a shot in my left arm. I owed nothing; Medicare came to the rescue.
He then said, “Your file flagged for never having a pneumonia vaccine. He explained people over sixty-five are recommended to have the high powered dose. He continued by saying I would then get a booster in thirteen months, around Christmas next year.
Since I usually struggle through some lung infection throughout the winter, I said, “Okay. Let’s do it.” He left the room.
When he came back, he said Medicare wouldn’t cover the shot. My supplement would pay 20% so I would owe the remainder of, $189.27. He continued by saying if I went to my Primary Care Physician, (PCP) maybe Medicare would pay, but often the doctors don’t have the vaccine in stock. My PCP is in Denver, and with all the unknowns involved, I decided to have Mathew go ahead and stick my arm again. I said, sarcastically, “It’s only money!” I paid my bill and left.
Once I was home, I wondered why Medicare would pay for the flu and not the pneumonia vaccine, and why my supplement would pick up anything if Medicare did not cover the procedure? I called the number on my Medicare card. Twenty-five minutes later I spoke with Martha. She said Medicare covered pneumonia vaccines and I should have Walgreens resubmit the invoice.
I called Walgreens, and after listening to their recorded female voice asking me far too many questions, I connected to the pharmacy and Mathew. He mentioned something about Part D (prescription drugs) Medicare, and I thought maybe that was the problem. So, I called Silver Script, my Part D provider and spoke with Alex. She said Silver Script covers nothing unless it is a CVS Pharmacy. She explained the situation: CVS and Walgreens don’t mix because of a domestic dispute. The husband owned Walgreens, and the wife wanted her own company, so she opened CVS. She was emphatic; my Part D only pays for meds from CVS.
I called Mathew back, (with no means to bypass the phone recording) and he said it is illegal for Silver Script to deny a person from choosing their pharmacy. He suggested I call back and opt out of the restriction. If they offer mail-order, I should opt out of it also.
I called Silver Script back, and, after ten minutes and another barrage of phone instructions, I spoke with Hillary. She said I needed to call another number. Ugh! Calling, I was immediately connected to Callie. She said, I can buy my prescriptions anywhere I want, and that Part D, like in David, does not pay for Vaccines; Part B, like in boy, does. Really?
I called back to Walgreens and spoke with Valerie. Mathew left for the day?!?!? I asked her to boot my account to see if my Medicare number was accurate. It wasn’t. I failed somewhere along the way to give them my new card.
I HOPE we solved the problem.
If you could not follow this story, welcome to my world; I couldn’t either.
I have NO idea how people who are older and less assertive or tech-savvy navigate all of this. Even with help from my sister who is an expert in all of this, I still want to scream, cry, or both. The solution is to stay healthy. Pay the premiums and never expect a benefit. I’m just kidding. But, we do need to prepare for secondary trauma (Insurance nightmares) when confronted with an illness. (or preventive vaccine)
The END of the story: I went back to the store in the morning when Mathew was again working. He was busy when I arrived, so Beth helped me. She tried my new Medicare card. No luck. She re-entered my old card number, and it was accepted. Ya. With the signature of the store manager, $189.27 went back on my Visa.
I have a happy face!
Tenacity does pay off once in a while!

(employee names have all been changed)