You are here: Home / Newspaper Articles / I choose Maverick over Parker

This week I watched two movies: Elvis and Top Gun: Maverick. One left me sad and the other exhausted—both had exceptional acting and good yet opposite examples of tenacity and determination. Elvis had a true villain, and Top Gun: Maverick a hero, but both made me think about the fine line between success and failure.

In real life, the same scenario happens for all of us—when we dream, set goals, work hard, and make adjustments, it can work out as planned, fail, or fall somewhere in the middle. If it turns out in our favor, as it did with Maverick, some people call it skill, some luck, some a God wink. When it goes wrong, people might claim innocence or ignorance, blame someone else, or take sole responsibility, which is usually untrue.

I call it life.

I think our true personality comes through in those moments of doing or die, or don’t do and die. What happens in those moments is what wakes us up from a
nightmare—that second where our decision determines whether we win or lose—succeed or fail—live or die.

How often have we said, “Wish I could get a do-over.”

Goals keep us thinking, doing, and moving. When the result is unsuccessful, we might retreat, give up, and let fear keep us from 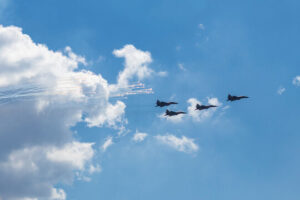 reaching for another dream. Or, like Hanks and Cruise, we can regroup and grow stronger. Whether we stop or plow forward, there is risk: a situation involving exposure to danger.

The danger could be financial, emotional, or life-threatening, but consequences are usually a given. Colonel Parker’s drive to be wealthy and feed an addiction costs him his reputation and Elvis’ life. Maverick pushed himself and the Navy beyond possibilities, rewarding him with respect. Both characters make many critical decisions. The outcomes were not similar, but they both showed an unyielding ability to jump failure hurdles.

Some people call it fate, and Forest Gump might call it destiny, but in these two movies, the difference was morals. Hanks lacked a conscience—he harmed others on his way to success. Cruise, the daredevil he portrayed, trusted his knowledge and skills to keep him and his fellow pilots safe for collective success. Maverick cared about the well-being of others, and Parker served himself.

In these two comparison movies, the good guy won. I love that. We also know the villain often wins—a phenomenon I don’t like or understand. Even so, in the end, I choose Maverick over Colonel Parker, always. I want to leave this world knowing I contributed to the smiles and success of others.