You are here: Home / Newspaper Articles / Men we call “Dad”

Today isn’t close to Father’s Day, but my dad, Lee Goble, died on March 9, fourteen years ago, and dads have been on my mind.

My research on family systems found dads with only daughters were held in higher esteem than moms. If you imagine a Christmas tree, dads were the star on top. In general, boy’s relationships with dad are different than that of girls. Boys don’t want to disappoint their dads and tend to need his approval. Dads show sons how to be a man and teach daughters what type of man to choose.

My favorite scene in the movie “Forest Gump” is toward the end when Forest and little Forest are sitting and fishing. Their shoulders sloped, and heads slanted in the same direction as they sat looking at the lake and holding their poles. Touching. 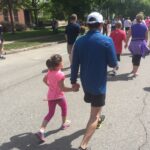 slowly strolling the path. I could tell one was older and assumed they were father and son because they had the same body type and carried themselves with a mirror-like stride. The scene was warm with respect and compassion. Sweet.

My grandson and his dad went to a Bronco game, and when I asked him what he liked best, I expected “The yelling,” or “The quarterback,” or “The curly fries.” Instead, he looked up at me with big brown eyes, and without hesitation, quietly said, “Sittin’ with my dad.” Priceless. 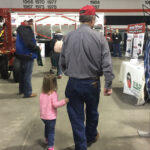 Leaving a family birthday party, my son hugged me and held his hand out to his dad. I said, “For God’s sake, give him a hug!” He did, and it seemed awkward, and both chuckled with nervousness. I hope they enjoyed the hug because both deserved it. Perfect.

It is common to see moms entertain children during church, take them to the cry-room, or pull necessities from an oversized tote. Dads might give “the look” for misbehavior or hold a child on his lap, but usually, they are less involved with the kids. When I see a dad pull Cheerios from his pocket or thumb through a picture book to distract an impatient or cross child, I am impressed. He is my kind of dad.

Just like being a mom, it is not easy being a good dad. We have no manual to read or YouTube to watch, our parents often hesitate, as they probably should, to hand out unwanted advice, and we default to childhood perceptions of what parenting does and doesn’t involve.

We are all products of our upbringing, and experiences are as varied as the men we call “Dad.” Along with his seven brothers, my dad likely modeled Grandpa and just worked hard and stayed out the way.

I am not a dad, so I claim no authority. I only know dads are vital, I hold them in high regard, and I miss mine.