You are here: Home / Newspaper Articles / Vegas in the dark 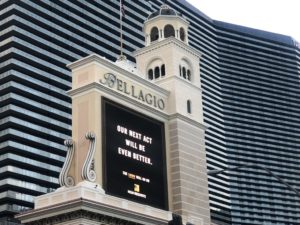 My husband had a job in Las Vegas, Nev., and I decided to ride along because I wanted to walk the strip and experience the feelings after the COVID-19 shutdown. I text a friend of our plans, and she wrote, “Vegas empty would be my kind of Vegas. I have only been there a couple of times, but the energy there is so dark that I could hardly breathe. Literally! I loved the Celine show, but the rest felt like a cloud of evil.”

I pondered her words, and wrote back, “I see how you could feel that way. A lot of evil does go on there 24/7. But, I have had a ton of great times in Vegas. It used to be so different than it is now—we wore fancy clothes and clunked around in high-heels, and ate exquisite meals while watching big-name performers. Today, the few shows don’t serve meals, and people dress more than casual and wear flip-flops. Back in the day, we could choose between 30 famous entertainers, at least. Many played free in lounges.”

Before the virus, the Las Vegas Strip and Times Square in NYC resembled 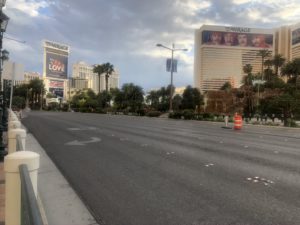 each other—whatever was labeled extreme or bazaar, was likely visible within the crowds of thousands. Today, they are both near empty, closed down, and coned off.

Colorado friends met us for a stroll on the quiet strip. I expected a few cars, people, or sounds, and that was delivered. What I didn’t expect was feeling a sense of peace and beauty—

something I’ve noticed several times since self-quarantining. The usual chaos and noise pollution were absent. The air was cleaner, and few jet contrails floated across the sky. There was no pull to go gamble, shop, or eat. It was just friends reminiscing, laughing, and feeling sad for the tens of thousands left without jobs since March 18, with no reopen date established.

We did see sweetness, like a photographer snapping pictures of a young 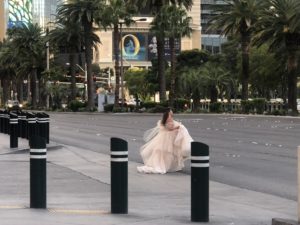 woman twirling in the probable prom dress she won’t need. A few kids were riding the sidewalks on boards and bikes, and like us, several people photoed the unfamiliar dark Las Vegas Strip. The only other time Sin City shut down was for one day after the assassination of JFK in 1963.

I felt no fear or stress at the moment, but sensed an urgency, of sorts, to remember past fun times and take in the present serenity. I knew Las Vegas would recover but realized it might not duplicate itself. 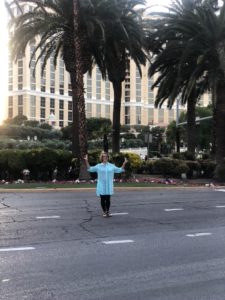 The last sentence of my friend’s message was, “Be safe on your trip to the City of Evil.” If she would have been with us, I think she would have been pleasantly surprised, and shared my hope for the future Vegas to look less dark, in more ways than one.

Until the next time: Live while you.