It is wonderful to get sweet stories every day, even when I least expect them. Little sparkles of gifts.

Here are three tiny stories told in a few moments. All three women, as they shared themselves with me, helped me remember places I visited and gave me refreshing perspectives.

I caught these stories while traveling from AZ to CO through Utah. Enjoy and appreciate the diversity of what women share when given only a few minutes. 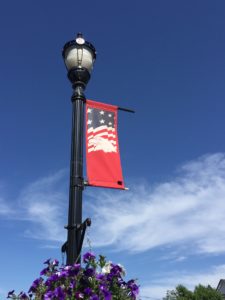 We stopped at an equipment dealer in Aurora, Utah, and a tall thin woman came from behind the counter to help us. We were looking for the owner, and she took us to his office, but he was out on a call. As we were leaving, she visited with us. Sue had worked at the dealership for many years, but that particular day, she said she would like to be home working in her garden, and she also had sheep needing a hair cut. We were on a motor cycle, and she said she used to ride. She would put her young son on the back and she finally quit riding because he would fall asleep, and she could not pay attention to the road and continually try to keep him awake and hanging on.

We met Kelly and her husband as we were leaving a bed and breakfast. They were there on their anniversary. We chatted awhile, and she said she had two girls, one was ten and one was two and adopted. She said the natural mother was watching both girls so they could celebrate their anniversary. She added, “It works out really well.” She glistened when she spoke of her daughters and when she looked at her husband. When she told us about being married in the Temple, her voice softened and her eyes focused across the street. It was as if she was enjoying the moment all over again. 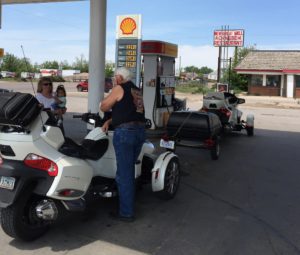 We pulled of the interstate to get gas, pulled into a station, and there in front of us was a Spyder (Can Am) just like ours. A very sunburned couple came out of the store, both eating ice-cream bars.  As the guys began talking about the bikes, Margaret said, “I looked out the window and told Ray he just had a baby, a baby twin. We laughed. She wore a pink baseball cap under her half helmet, and she had spunk. She was cute. They were from a small town in Michigan, and they were on their way to Oregon to see their grandson who was in prison. Someone in the family visits him once a year, and it was their turn. He had two more years of an eighteen year sentence. He was in the Army, and one night, after drinking too much, he sat on a hill and shot at cars driving on the highway. Nobody was killed or seriously hurt, but he was sitting in a strange area where three counties were affected and he received a sentence from each. She said, “I hope he learned not to mix guns and alcohol!”

I thought how hard that must be. She took it in stride, and loved him no matter what he did or where he was.